Compared to all the other updates that Dofus Creator has had, this is the smallest of all, with less news and content.

However, this is necessary so that the site's versioning can follow new implementations, such as our new partners area and still will get several small implementations even in this version 1.9.

Thanks to all the bug reports! Make a fight simulation in real time fighting against the Putch or other players!

This update was supposed to be bigger!

In this update I would implement the system of sets Comparation

, but due to lack of time I was unable to test it in every detail, so it will be for a next version which, by the way, will arrive very soon!
If you were curious to see how the comparison system is, there on our Discord I posted an image of it working for the guys to pass the feedback.

The Putch system originally (last year) was supposed to be a Dofus "mini game" here within the Dofus Creator. Unfortunately Ankama did not release the authorization to create this little game that would be really fun, I imagine, but at least it came from the Putch system. Did you like it? Visualize the damage of Osamodas summons and download Dofus Creator Mobile on your smartphone!

We created the Dofus Creator Mobile for mobile devices and you can download it right now on your Android phone in the PlayStore! Click to download:

Attention: at the time this update was posted, the Dofus Creator Mobile item database is only translated into Portuguese. The English and French version will come soon, but you can test download it now to see if it is already working:

A much shorter update than usual, but with a great relevance, especially for Osamodas lovers.
I especially thank Raf-killer (Crocabulia) for his help with this class.
It is a personal (and ambitious) goal to make Dofus Creator the best builder out there! And for that, what I need to do is add that that no other builder has bothered to do, and now, with the display of damage from Osamodas’s summons this becomes very clear, as well as in the update where it brought the damage from the Roublards bombs. The trend is to get better and better :)

In a next update, I want to add a "mageado items" tab or something, and in that tab do as I did with the exano pm gelano prototype, however, add more items that many users commonly use, and thus make it easier and faster to set up your project with everyday items. I also think, instead, to create a "favorite items" area where you can save all the items you use most often, and then, then be able to equip them in a future project with one click. Anyway, many things come to mind now and unfortunately my time to develop all i want is limited lol.

Two other news that you can look forward to in the future: Dofus Creator Touch e Dofus Creator Archmonster. Well, the name itself says what it’s about, isn’t it? So wait for news XD Find out how many visits a project has received!

As always, I try to bring innovations to the Dofus Creator website of things I always wanted to see on other sites and never found. One of them is to be able to see if the projects of the sites are well visited or not, as well as to be able to see better how much a project costs for be assembled. It is clear that the price calculation is a little out of reality, but it is already a start for an average quote.

This update would also bring damage to the invocations of Osamodas (just as it was done with Roublad bombs), but with update 2.58 many spells of the class have been modified and have also affected their summons, so, dear Osamodas players, this implementation will stay for the future.

Many of the implementations made in this update came from user suggestions. If you want to send your suggestion, just contact, I will be happy to receive them :)

For a next version I intend to work better on a feature that was abandoned on the site: the achievements.
I want to continue doing more events on the Dofus Creator website and the best way to reward players is through medals and trophies.

New pages are also being designed on the website, such as the Brumen Laboratory, User Ranking and also the search and display of Dofus Creator user profiles. The project filters have been improved, find everything you want!

This was a very short update (and very quick to do), but it brought some new features to the Dofus Creator that will greatly improve users' usability with the platform. The idea was to strengthen one of the things that makes Dofus Creator unique, which is its project filter that no other builder has, besides of course, also improving the use of the platform and taking advantage of this wonderful tool for the development of your projects. I hope you enjoy.

In fact, all implementations that were not about the search filter came from Dofus Creator Retro during its development phase. While I was developing it, I added some things that were not here and wrote it down. In the end, just a few Ctrl + C and Ctrl + V were here and everything was ready; but that is not a reason for you to think that the life of dev is easy, as Dofus Creator Retro took 2 weeks to be ready even using all the base sources of the original Dofus Creator. It is even worth knowing if you haven't already :) Innovation in the Dofus scenario: get to know the Community Posts!

The items below are already available (or not) in this update, however they are in an open beta phase where users can already go testing and reporting their bugs. These items can change at any time.

Corrections to the Dofus 2.54 version

Finally I was able to bring Dofus Creator the beginning of one of my idealizations for this platform from the beginning: the creation of a social network for Dofus players .
There are already several Dofus builders out there, and I am very grateful to those who give preference to the Dofus Creator, but one of the innovations I intend to implement here on our website is to make a community. Most games already do this, but the Dofus being a "closed" game globally, where most players come from France, Spain and Brazil/Portugal, I feel this need to do something that can bring all players together in a unique digital environment.
The next step to make this idealization grand is to finally add to the projects a means of interaction by other users, such as likes and comments, but in the meantime I say that you, users, can be carefree that very soon will come, and just like the Community posts, lots of innovation surprises will arrive as well. This is one of the implementations that ask me the most, and I was second only to the filter of the effects of items that arrived and everyone can enjoy!
For those who don't know, (almost) every day of June, the Facebook page of the Dofus Creator was creating new posts for each of the news in this new update, whoever follows the page already knew everything that was to come. So this is an invitation for you:
Follow Dofus Creator on Facebook
Special thanks go to Illyzaele's Kriegers guild. You are awesome ❤️

Great news will come to the Dofus Creator very soon!
Continue accessing our website, which is done with great care from player to player, send your feedback , report and suggestions (I read them all!), And mainly, sharing with friends.

In a nutshell, let's say that the next update to the Dofus Creator will be geared almost exclusively to mobile devices, and you also won't need an internet connection to work.
You can deduce several possibilities for the sentence above. Are you correct?
Wait for the next surprises 😄 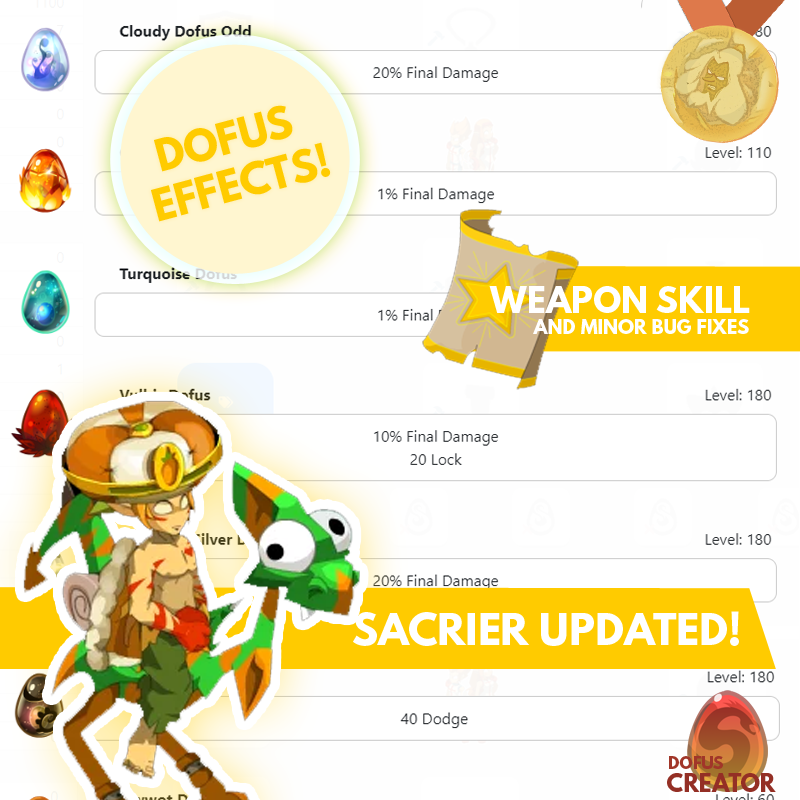 It is now possible to add the effects of the Dofus to your project and also the weapon skill, see:

The new version 1.3.2 brought corrections for some bugs of the platform that the users had already been reporting for some time, and additionally brought some small news and improvements in the platform.
This update (1.3.2) should be version 1.4.0 that would bring the item's effects filter. In fact, the item effect filter is already ready, but it needs some polishing and corrections before it is officially implemented in the platform, so it will arrive in a future update.

This version came with less news than previous patches, however, it brought several bugfixes that make the platform more stable and reliable.
I inform you that the next version of the platform can take a long time to be implemented. At the moment, as an independent developer, I have other projects to start and finish development, as version 1.3.0 of Dofus Creator marks a milestone completion of platform development.
This does not mean that the site will no longer be updated, on the contrary, new implementations will come, but they may take longer.

For the next update (1.4.0), according to numerous requests from users, the item filter will be added. As such, you, the user, will be able to filter the items by the type of effect it has. And just as it was idealized by me at the beginning of the development of the Dofus Creator, I want to make it a social network for Dofus players, so I will bring more functions like comments, likes on projects, chat, views counter, profile photos, among others.
Wait for the news!
05/04/2020 Ver 1.2.2.1 Project save and sharing has arrived!

One of the great promises of the platform since its beta launch is finally available to all players, get to know the news:

Unfortunately due to problems like coronavirus this update had to be completed with urgency, and some elements were missing, such as the question of saving projects as a favorite, other achievements and others small details like inserting user profile picture, etc.
These items will be delivered in an upcoming update.
We hope that this bad phase will end soon, meanwhile, stay at home playing and continue using the Dofus Creator to assembling your projects. See you soon! 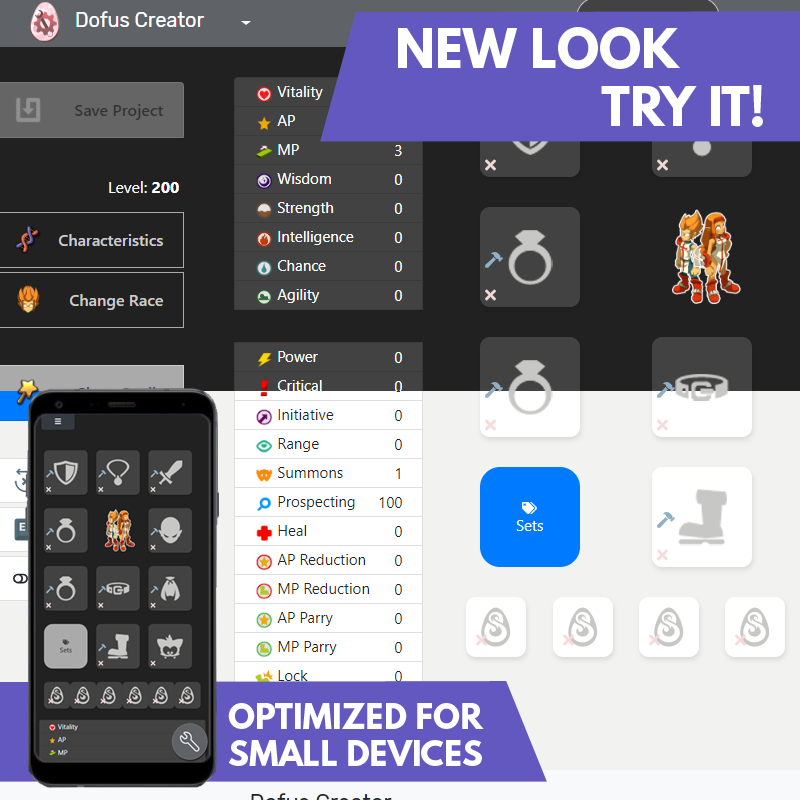 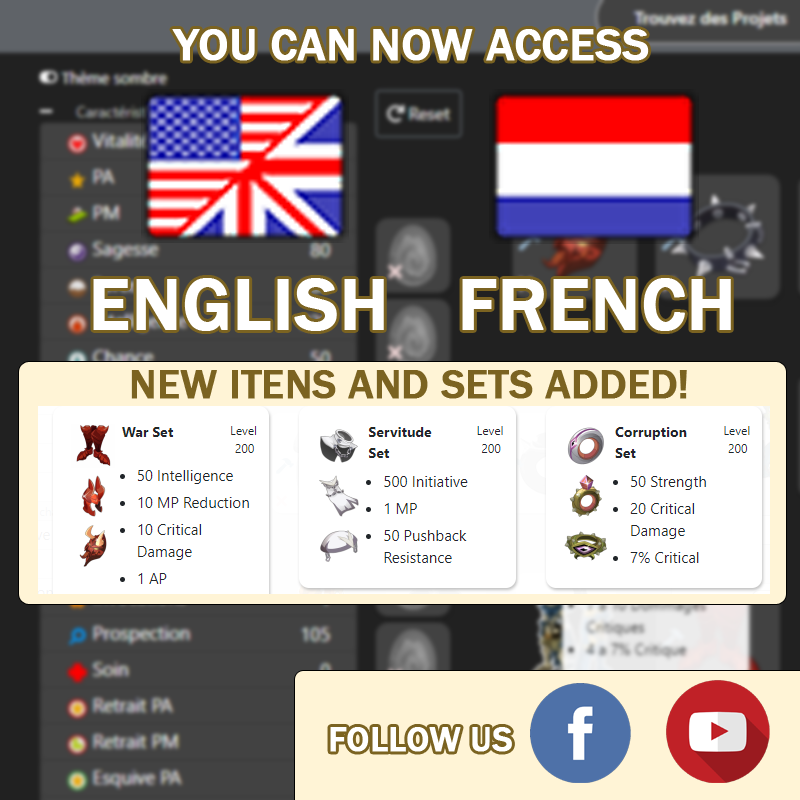